Markus Weniger was born in Dresden, Germany. He holds two Master degrees in civil engineering and Psychology and Pedagogy of Social Sciences from the Dresden University of Technology. Later he became a passionate mountaineer who conquered the high peaks of South America and the Himalayas. He spent two years on the road around the world. Since ten years he is spending regularly time in India to learn more about the Art and Science of Yoga. He practised and received teachings from the Iyengar family, Usha Devi, Zubin, Chanchani's and Simon Morrocco.
He has given intensive courses of Yoga around the world, e.g. Australia, Germany, India, Indonesia, Montenegro and Serbia.

He and his wife Marija run the Iyengar Yoga School in Belgrade and founded the Serbian Iyengar Yoga Association.

Markus is a certified Iyengar Yoga teacher who combines the German discipline with the Indian sophistication and flexibility. Through his teaching he clearly and directly transfers practical Yogic philosophy that leads to inner liberation which unites body mind and spirit. 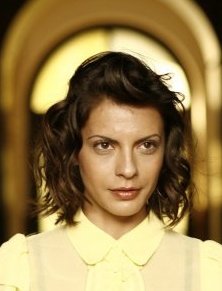 Born in Serbia. Graduated from famous Academy of Fine Arts in Belgrade. The art of acting gave her the answers to many questions about self-realization and creativity.  Popularity brought her the insights on the falsity and transience of fame and wealth. She started her humanitarian organization and devoted herself to working with orphaned children. A lot of projects and workshops throughout Serbia and India were successfully realized. Her urge for inner realization brought her to India where she  studied Yoga intensively. After intense practice her Guru initiated her in the Pranayama techniques of Siddha Yoga. She is practicing Iyengar Yoga meticulously in all the major centers of India. In 2014. Yogacharya B.K.S. Iyengar gave his last interview to Marija for the benefit of the youngsters from Serbia. She is the one who introduced the Iyengar Yoga for the first time to Serbian people. Currently runs her own Iyengar Yoga Hall in Belgrade. Certified by Geeta Iyengar. Founder and president of Serbian Iyengar Yoga Association.

"When I am in an asana, I go beyond the chronological and psychological boundary of time." ~Guruji BKS Iyengar

Guruji emphasises the aspect of maintaining an asana to build it up, develop and surface the effects and reap its benefits.

As the endurance, power and confidence grows the timing should be increased. Timing is important from the point of view of creating and developing a circulation in the body which is peculiar to the asana.

Timing is not a mere calculation of seconds and minutes one remains in an asana. It is a 'time requisition' made by an asana for its evolution when one matures in sadhana.

When each cell is sensitive to being in the present, it is timing.